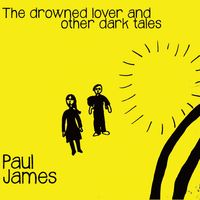 From the recording The drowned lover and other dark tales

Traditional English folk song with additional music composed and arranged by Paul James. The bagpipe tune is from Brittany.

As a sailor was sailing away from his shore,
The waves and the billows so loudly did roar,
He wrote to his true love, I shall see you no more,
So farewell, my dearest, you're the one I adore.

As his true love was walking down by the bay,
She saw a drowned sailor on the beach where he lay,
And as she drew near him, it made her to stand,
For she knew it was her true love,
By the marks on his hand.

She put her arms around him, saying "Oh there my dear",
She wept and she kissed him ten thousand times o'er,
And she was contented to lie by his side,
And in a few moments, his true love she died.

Down in the old churchyard these two were laid,
And a stone for remembrance was laid on their grave,
Their joys are now ended, their pleasures are fled,
And the grave that they lie in is their married bed.